These photos are incredible.

Inspiration, originality and above all, great music making

What an amazing festival Sax14 was. So many great artists, all on the saxophone, united in the Amsterdam Muziekgebouw. I tried to go to as many concerts as I could, but some I had to pass, due to my own activities and in the end, because I was way too tired!

The Muziekgebouw was bursting with saxophone, with music. Every 15 minutes there seemed to start something else. Either in one of the halls or outside them.

I had the honor to play the opening concert with ASKO-Schoenberg, Aurelia and Artvark Saxophone Quartets. Arno Bornkamp, the artistic leader of the festival asked me to play Donatoni’s ‘Hot’, one of his favorite pieces he told me a few times: the pressure was on :-)

I had mixed feelings after my performance. The piece is very hard and very fast, there’s hardly time to think and reflect during playing. And afterwards only the moments that I wasn’t sure about stayed with me. I had to give a few days. Luckily the Volkskrant wrote a very positive line about my performance. After hearing the radio recording I too could be satisfied.

After me, the Aurelia Saxophone Quartet played JacobTV’s Tipperary Concerto. I only heard this piece during the rehearsal and it was a lovely piece which was played extremely well. Only a short time ago the Aurelia changed their concertmaster and baritoneplayer, but the new Aurelia Quartet seems like they have playing together for years now.

But the thing that I wanted to talk about is the way this festival combined forces, sometimes very unexpected. I was so disappointed I could not be at the James Carter/Vincent David and Lars Mlekusch concert. But as I understand this was a gem in the program. And who would have thought this would be successful combination. Sax14 apparently :-)

Branford Marsalis is someone who is interested in many musical styles, and Sax14 got a hold of him for a recital at the BIMHuis (where I was not present either…), a masterclass and a concert with the Netherlands Chamber Orchestra. Branford put the classical saxophone on the map and this is great for the classical saxophone world. But Sax14 went one step further and just erased the borders between the genres.

Imagine a festival where Vincent David plays his Boulez, Mlekusch his Tenney, Branford Marsalis plays a jazz recital, all level saxophonists play together in a mega saxophone orchestra and that is closed off by Candy Dulfer. Well, it came true.

Sax14 made me think, gave me inspiration.

Sax14, some videos and opinions

I was present as audience and artist at the international Sax14 Festival.

My good friend tenorsaxophonist Niels Bijl gave a recital at the BIMhuis, Hollands nicest concert hall. And Niels played great. He played new pieces written for him interchanged with Telemann Fantasies. To be honest, I liked the Telemann Fantasies the best. Niels was at his best here. I heard him play these Fantasies several times and this time they were the most free and expressive.

Niels bought a tenor mark VI a while ago and I heard him before on this instrument, it sounded absolutely marvelous! I thought he played this instrument during his recital. Everything I heard confirmed the Mark VI. But it turned out to be his old series II. How wrong could I be!

Jan Menu's piece Little Bird (Depressed) deserves special attention, what a beautiful piece! as well as Jabra Latham – The second Thing, which was a great minimal piece. It was bases on a popular tune by Roxette. But I could never have guessed. This might inspire me to finally compose something myself,

The organisation did  great job programming. The concerts were very interesting and highly original. A great mix as well, but it's a shame this concert wasn't packed!

The Amsterdam Conservatory Ensemble The Ebonit Saxophone Quartet is an ensemble I already know as a judge for a saxophone quartet competition in Den Bosch. They make a point of playing everything by heart, which is extremely effective.

As I wrote before on this blog: the Ebonit is one of the newest and most promising quartets around. I heard them before at the Den Bosch saxophone quartet competition and I was blown away. And I still am. What a great ensemble playing, and everything by heart... Wow!

Just one little thing that is probably highly subjective: when they played for the radio, their energy is aimed towards the middle of the ensemble, and sometimes it could be aimed more outward.

Artvark Saxophone Quartet was a revelation. I was so pleased to meet them. I knew Rolf Delfos and Bart Wirtz already from other groups (the Houdinis are my youth heroes!). Artvark was great, original, fantastic tunes (the Turkish quarter tones one was a highlight). They also did a great job in de Stijl by Andriessen.

I heard many great things about Artvark the past years. And I must say, they are very inspiring. I am fond of the sax4tet and they bring something new to the genre. By composing their tunes themselves, but also because they do not limit themselves to their own genre. They want to get beyond their comfort zone.

Artvark paired with ASKO-Schoenberg and Etienne Siebens in Andriessen's De Stijl. Andriessen's style is very recognizable, to some even cliche and smug. But for me, I loved it, it was very impressive. Yes, it was too long, the form wasn't too clear, but wow, this man can compose. And the execution was great as well. Bravo Artvark!

Gabriela Montero live at the Concertgebouw

Me and my girlfriend decided to go to a concert in stead of a movie as a going out night. I had mixed feelings after.

One hand I am deformed. I listen differently than my friends who are non-musicians. The audience loved the concert. Standing ovations, several times. And the concert was nice, sure. But nice, that was it. At least until the final part. On the other hand, I am also public and want to enjoy myself.

Montero started out with Brahms. I am not sure which piece, because I didn’t have a program. The first movement was absolutely really nice. It set a great atmosphere, and although I already realized that this not the concert of the year, I was glad I went. But in the second movement Montero started to play ‘emotional’, like postponing the one way way too many times. The same gesture over and over. Pearl chains of notes followed, sure, nice, virtuoso, but not enough to keep on the tip of my chair.

Again, until the final part where she started improvising. She is an absolute wonder of improvisation, I wish she did that the whole concert. I have never heard anything like it. The way she presented it now was like a sort of extra, a dessert. But this could be her main thing. She might develop a concert program in which she can improvise the whole time, maybe alternated with some classical tunes. Then I will hear a concert that is truly different and remarkable.

Although the improvisation is not my taste, it is very virtuosic and musical. I could imagine that if Montero would go one step further and dive into the depths of impressionims, Stranvinsky and jazz she would be able to give a sensational concert.

Funny thing is that also play much better when she is improvising, less hesitant, less ‘emotional’, more simple, straight forward, no unnecessary decorations, accelerando’s and ritenutos.

But I was one of the few who thought like this. The audience loved it. And don’t get me wrong, it was very good, but not enough. But she could be….!

Radio 1 over 'The End of Desire' 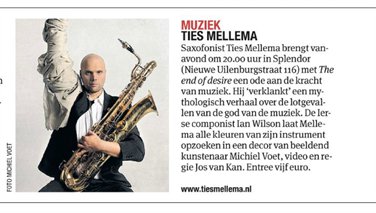 The End of Desire' Scene photography by Michiel Voet 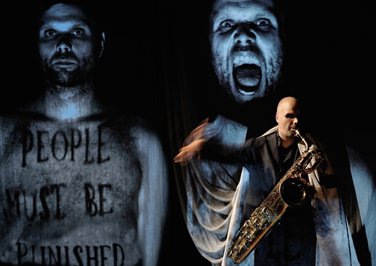 Vrije Geluiden Radio, preview of 'The End of Desire'