The urge to create

If I want to get anything from this period, besides my health, it is to be able, to not be embarrassed about and to take the time to create. To make something out of nothing.

When we go to school the system takes away developing creativity and further in kids. It is all, putting it very black and white, about analysis, about using existing systems to come to certain and especially planned result.

I remember my first poetry class when I was 12. The teacher asked what we thought a certain poem was about. I was fascinated by the text and gave an answer. I can't remember what I said or which poem it was, but I did remember the answer: 'No, that is not correct'. Someone else gave the 'correct' answer.

The rest of my high school followed this path more or less. And even after 10th grade my Greek teacher tried to stimulate me to spend less time on my horn and music and more time on school. How wrong could he have been!

It would all have been bearable if our creativity was stimulated somehow. I can remember one project which we were all very excited about. A physics project that we had to come up with ourselves and work our on our own.

But that was it.

Also on the conservatory I missed basis classes to create something. And I always defended this: classical music is creative. We have to think of programmes, phrase, come up with a tempo, etcetera! But in the end we play notes by other people. Which is great , don't get me wrong. There's great music written which I love to play. But I miss that nobody showed me how to make things. Really whatever. To write this blog is something already. But how great would it have been if someone would showed how to come up with subjects, and how to construct a text? I am finding out now as I write. And that works too. Like the old jazz players, who learned to play by doing it, playing sessions, imitating records. Sure, that works too. But if your calling is not strong enough you're stuck reproducing. And I think everyone should know what it is to create something, from nothing. 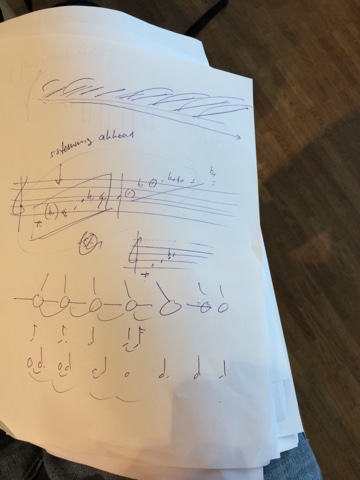 Martijn's suggestions during our class

Today I had my first composition class from Martijn padding. It was a revelation. I prepared something for him. A sort of minimalistic modal piece for solo instrument. The first step was to overcome embarrassment. I played so many good notes in my career that after every two notes I judge them: I have heard this before and better. But I did passed this. I think because of photography. I learned to separate the creation flow from the analysis flow. Like practicing, playing and trying to analyze what could be better.

I sat down at the piano and started playing notes and writing down what I thought sounded good. I did get stuck often. But I just tried to go on. And out came some ideas for my composition class which we used and discussed. I now have a starting point for something new. I am not sure how I will develop this. And that's fine. Even if it won't evolve into a piece it's all good. I spend some hours into making something. And that's what it's about for now.