Things are happening to my body. You know, the chemo is like poison, blah blah, kills the bad cancer cells, but also lots of good ones. That's why my hairs falls out for example. 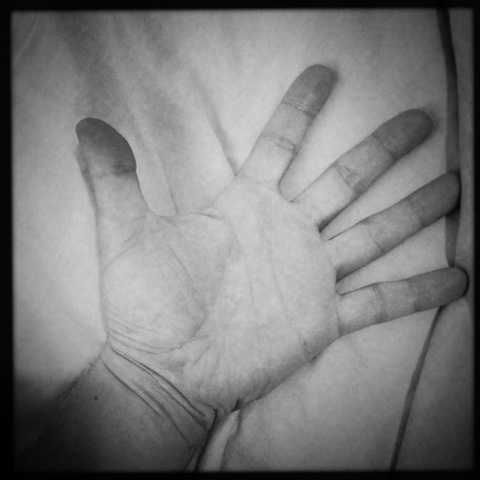 Tonight I woke up and realized that I lost part of the feeling in my left pinky. It's a side effect of the vincristina, the medicine I get in the second week, which I had twice now. The medicine can give nerve damage, not always, but in my case it apparently does. Usually you first lose some feeling in the outer parts of the nerves, finger tips and toes. It could also give some damage to my fine motorics. Usually it is reversible, from what I understand. But doesn't have to be. I already had some weird feeling in both of my wrists, which started with one wrist last week, which I thought was because of the infusion.
It's al very vague still. A non musician might not even have noticed yet. But I am very focussed on it. I want to get as much of this medicine in as we can, but at the same time I do not want to run the risk of damage to my fine motorics, especially in my hands...
I  am not sure what the consequences for my sax playing will be. Probably not so much, but we'll have to see.
In the mean time I am playing the sax every day. Technique mostly. Scales, patterns for jazz, etudes to give the specific fine motorics I need the play the sax exercise and to know if something is going on with the nerves.
I spoke to a patient of my doctor who had the same treatment and is finished now for half a year. He feels good again. Actually, he has been feeling good for some months again. This summer the neuropathy did not bother him anymore. Half a year and it was gone in his case. But... The chemo is different for everyone. The nurses cannot and will not give any predictions about how the chemo will affect someone.
I got quite panicky tonight, feeling my pinky. It's all out of my control. When I have the flue I stay in bed. But I cannot do anything in this case. All I can do is create the best environment to minimize damage, in general.
My body is still mine. But things are happening. And most of these things, if not (almost?) all are reversible. No reason for panic.
Let's see what the doctor says. She's dealt with this before. She should know.
Next week I have a pet/ct scan to see how the therapy is affecting the cancer. I can already feel the glands shrinking when I feel in my neck and chest. I think it's working.